One of our clients recently created an awesome marketing campaign I want to share with you.

This is yet another example of a business that saw the wave of economic uncertainty brought on by the pandemic and decided to get creative instead of just hunkering down.

While the campaign hasn’t officially launched yet, he gave us the go-ahead and to take you behind the scenes and show you how it works.

If you’re considering launching something new or creating an additional offering for customers, you just might find an idea or two worth stealing. 🙂

Let’s check it out! 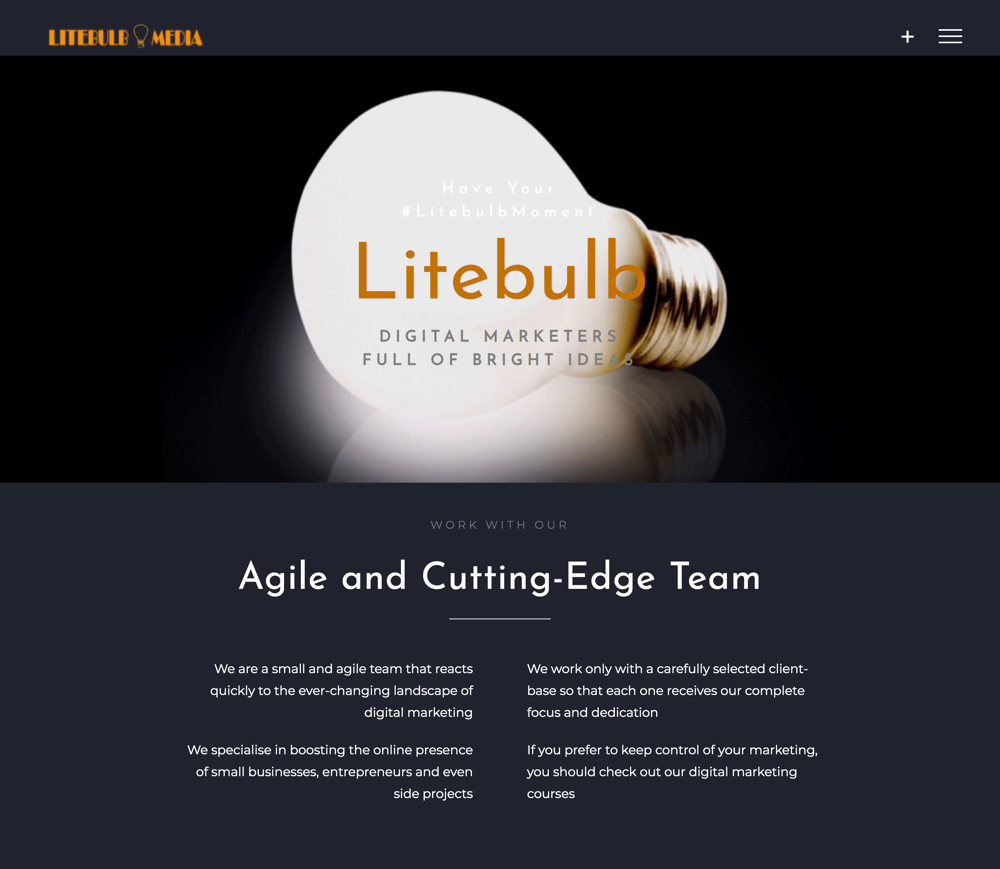 Done-for-you services have always been the business’s bread and butter, but when COVID-19 hit, Michael thought it would be smart to start offering courses as well.

That way, if any clients were forced to cancel or delay projects, Litebulb would have another source of revenue waiting in the wings.

Most businesses in this position end up creating the first course idea that comes to their mind. Or they just create one that teaches people how to implement their most popular service on their own.

While this approach might work occasionally, it’s often a recipe for creating a course nobody wants.

Michael plans to avoid this mistake.

“We intend to ask subscribers what they’re interested in learning about and then building it for them,” he said, “rather than building what we think they might want.”

Before he can learn what subscribers want, he needs to attract subscribers who are likely to be interested in learning about digital marketing.

That’s what his campaign is designed to do.

The Campaign: Build a Waiting List That’s Hungry to Buy

First, he created a Facebook ad to build the waitlist for his course, which he’s currently positioning as a digital marketing school. It teases a surprise discount to make the offer more enticing: 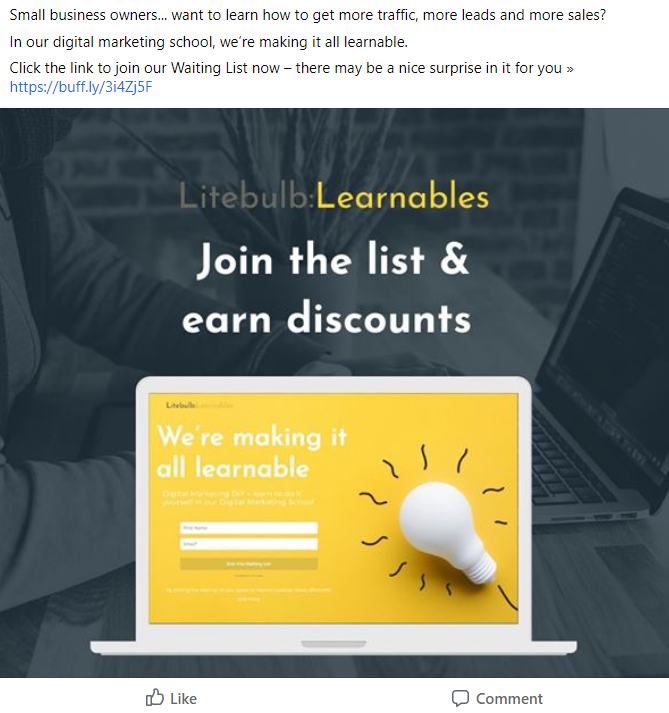 The Facebook ad sends people to a landing page Michael built with our free tool Welcome.ly. Here, they can enter their email address to sign up for the waiting list: 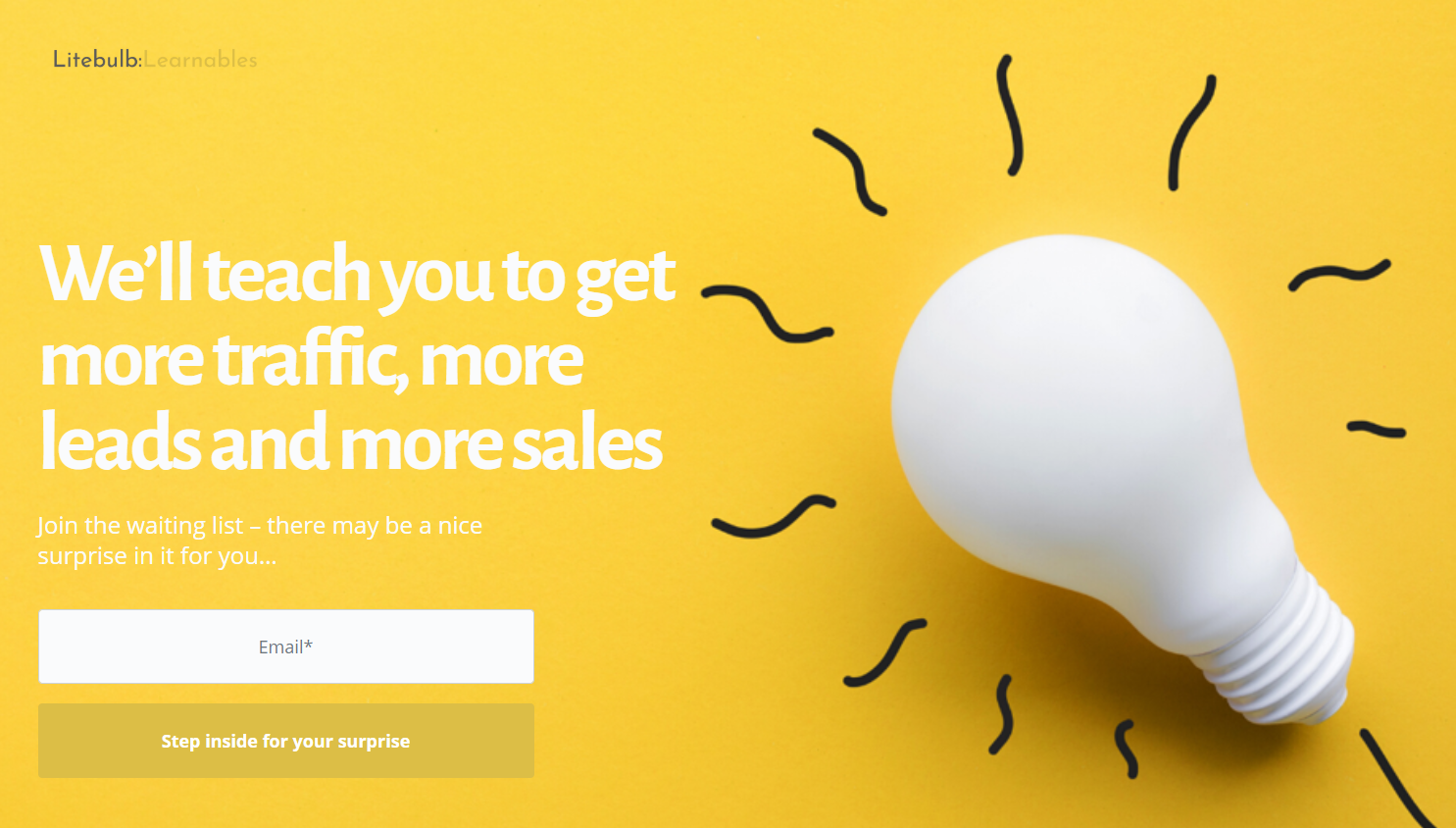 This is where things get interesting. 🙂

After signing up for the waiting list, they’ll land on a thank you page Michael created with our free tool GoViral. This page lets them know they’ve already earned a 10% discount for Litebulb’s upcoming digital marketing school, but they can double it AND get a free gift if they share a Facebook post about it. 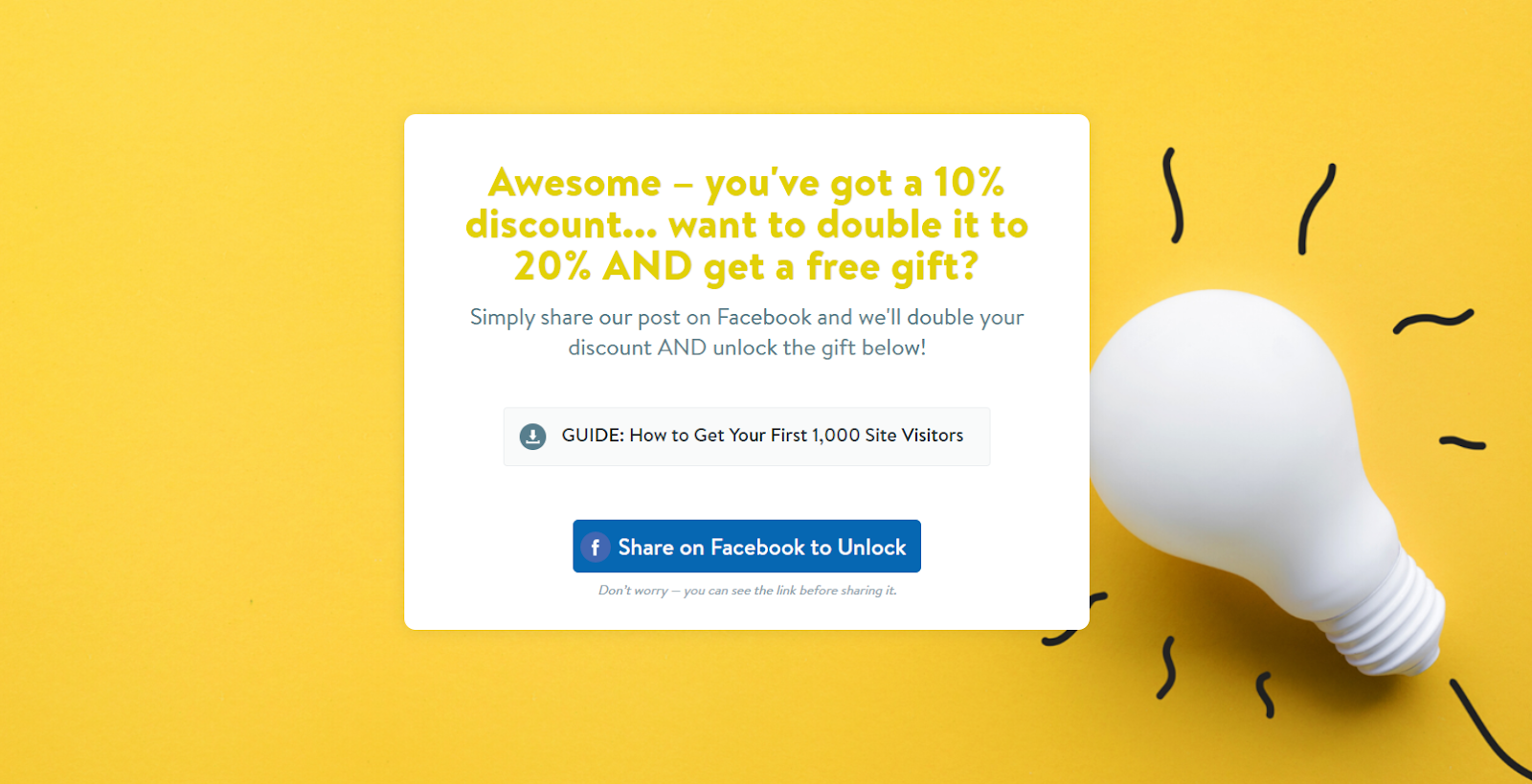 They’ll be sharing the post that was featured in the Facebook ad they originally clicked. When people share your Facebook ad, it can lower your cost per lead (in addition to driving more traffic to your landing page).

After sharing the post on Facebook, leads will get access to the guide Michael promised, “How to Get Your First 1,000 Site Visitors.” He created the guide using our free tool for making lead magnets, Attract.io: 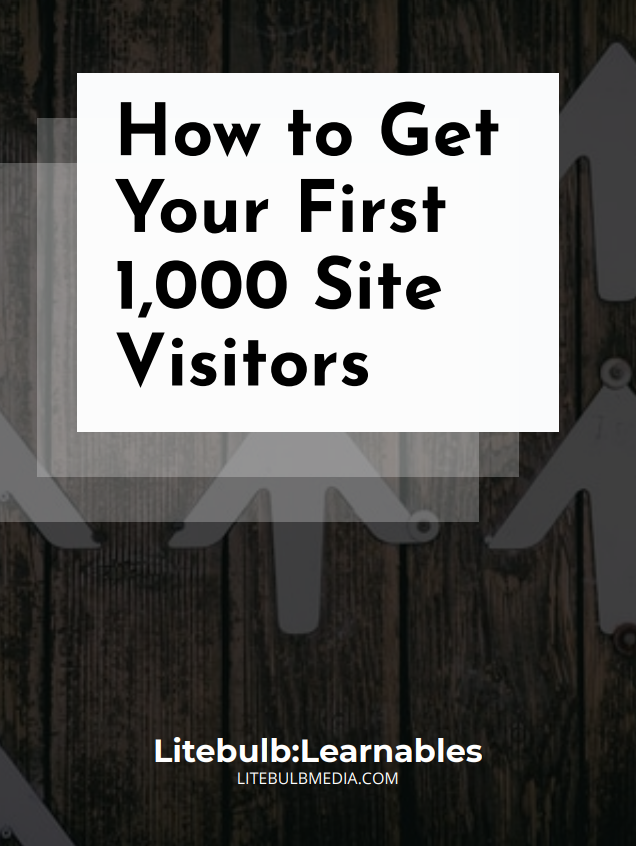 On the introduction page, Michael teases an additional discount they can unlock by reading to the end of the guide: 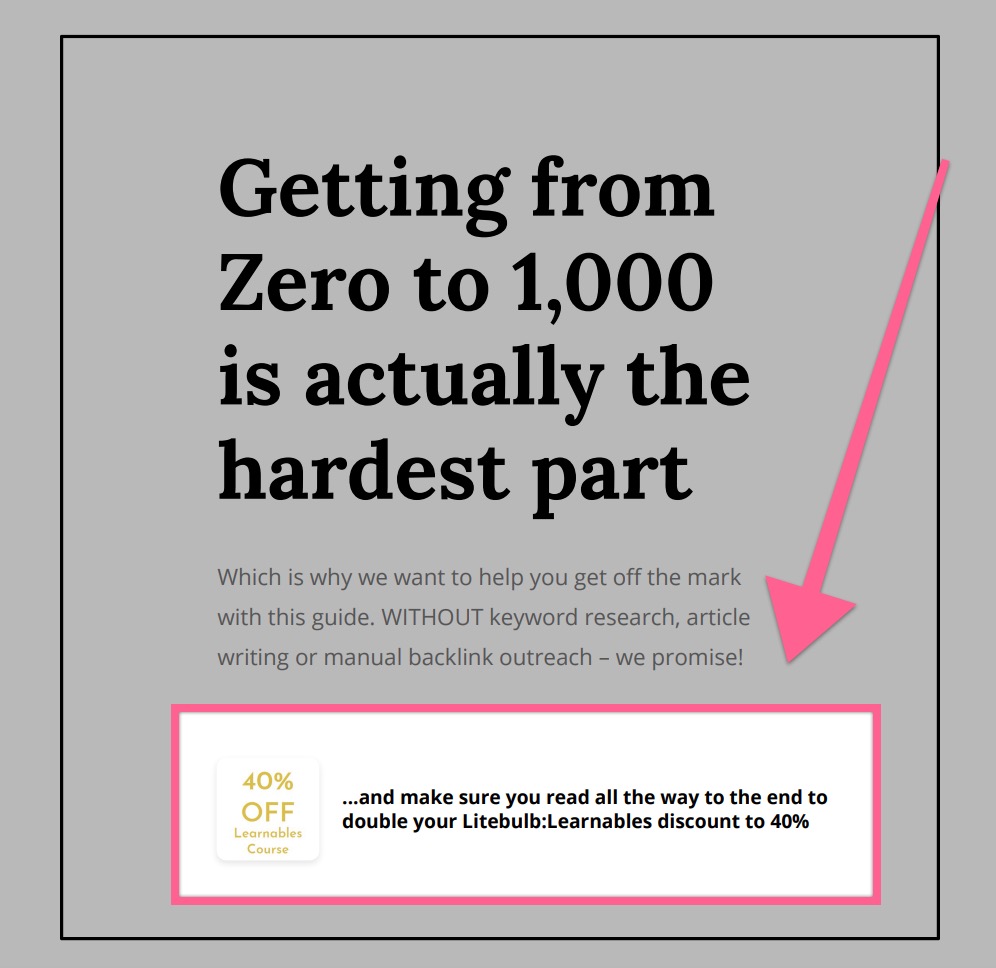 While it’s always a good idea to have a CTA at the end of your lead magnets, it’s even better if you drop an enticing hint about that CTA somewhere near the beginning. Smart move!

As promised in the intro, the last page gives readers an opportunity to double the 20% discount they’ve already earned. All they have to do is complete one more step they’ve already agreed to do once before—share something on Facebook: 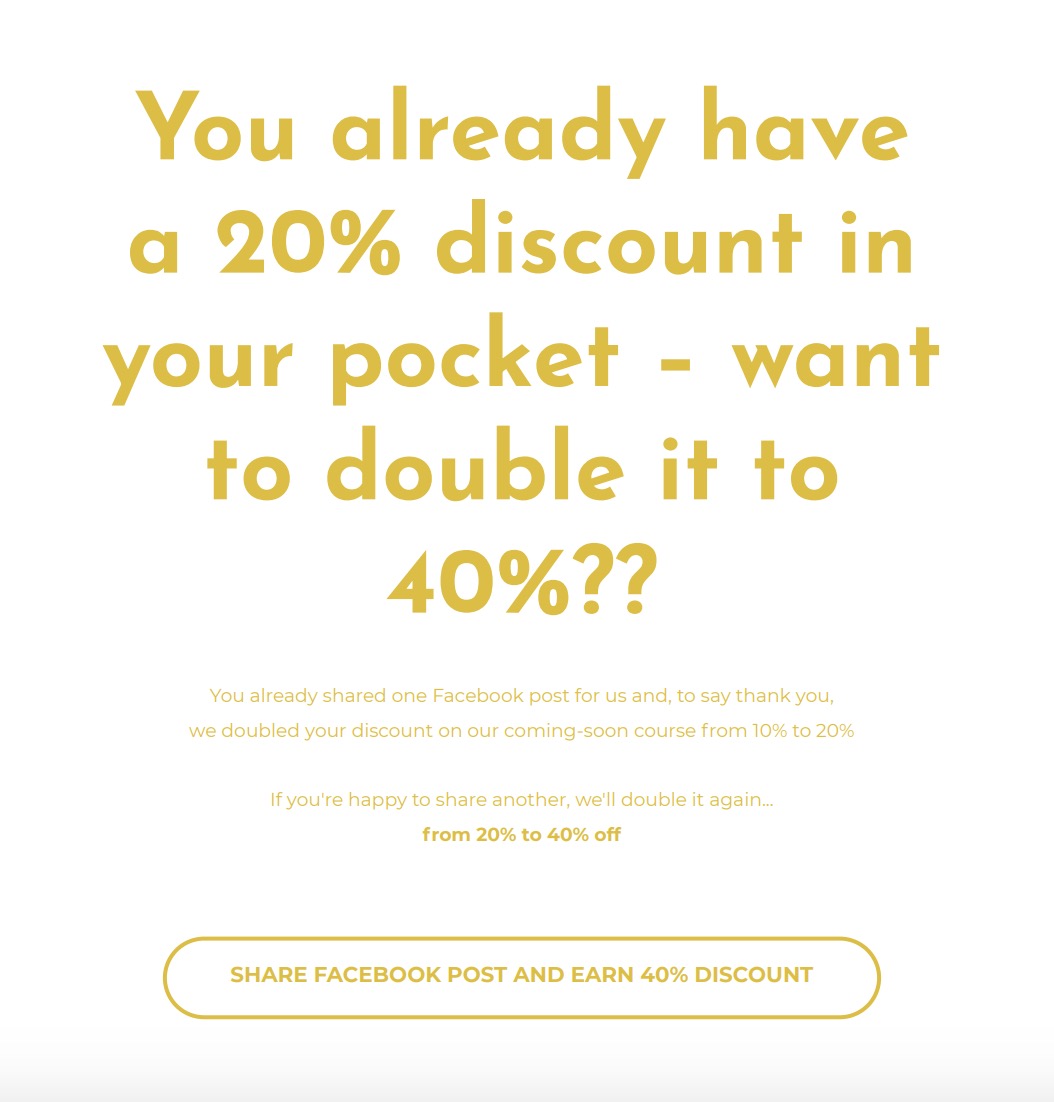 Notice how the copy underneath the headline reminds readers that they already shared a Facebook post to unlock the 20% discount. This is a subtle way to minimize the friction of asking for an additional share.

When they click the CTA button, they’re sent to a second GoViral page that lets them share a second version of Michael’s Facebook ad in exchange for the increased discount:

Here’s what the second version of the ad looks like: 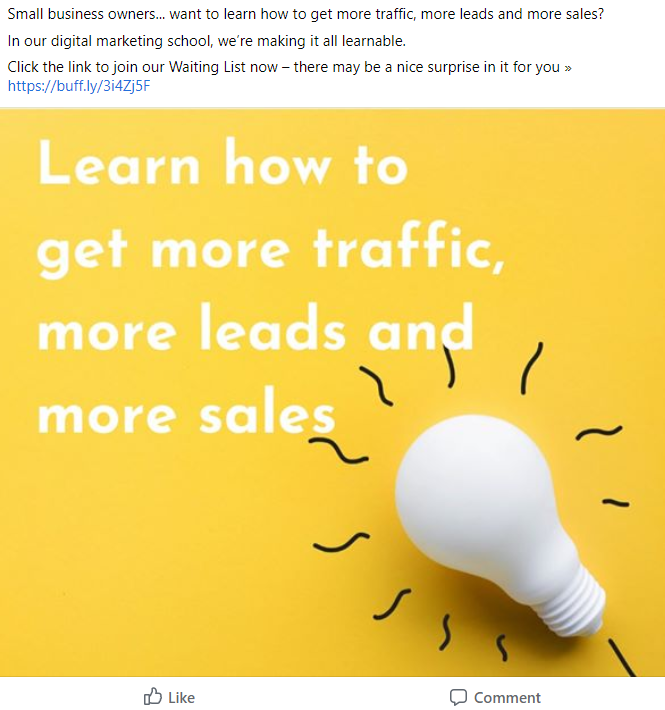 After sharing the ad, they’re directed to a page that confirms they’ll receive the 40% discount before enrollment begins: 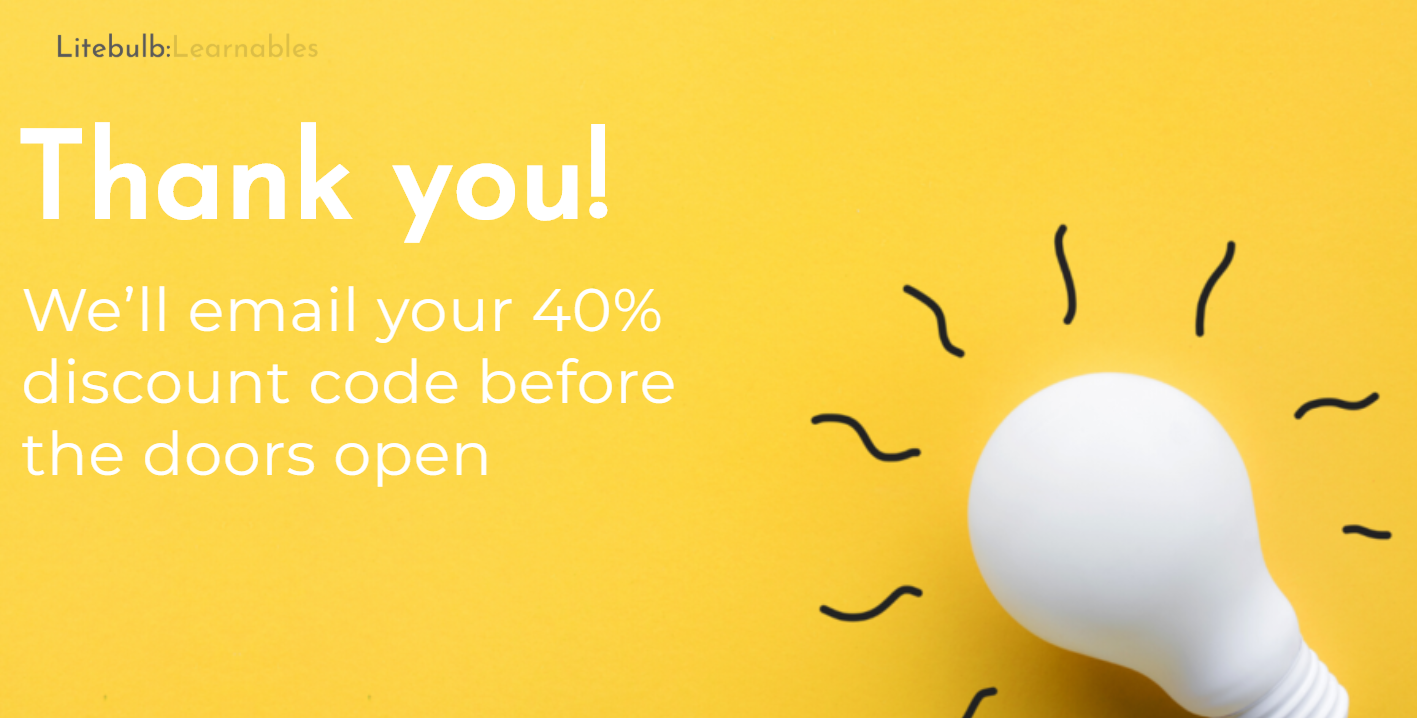 “I know it seems like we’re asking them to go through a lot of steps,” Michael said, “but there’s actually only eight clicks from start to finish. And throughout the process, they’re incrementally earning better rewards (2 clicks = 10% » 3 clicks = 20% and gift » 3 clicks = 40%).”

Can’t wait to see what kind of results Michael sees from this.

So, what was it like to get coaching from Growth University as he worked on this campaign? Here’s what Michael said:

“The Growth University team has been phenomenal so far. Matt (our coach) is absolutely amazing…the guidance/advice he’s provided up to this point has been brilliant. The platform they use for outlining their Playbooks and managing communication between client/coach is also really well put together. All in all, they’re providing a fantastic service!”

If you’re looking for new growth opportunities for your business, we’re here to help.

Click here to schedule a free Strategy Session with our team. <<<

We’ll audit your business, show you what’s working for our clients, and walk you through the step-by-step process you could use to 2x your revenue over the next 12 months.